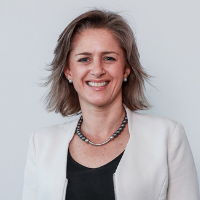 Dr. Lathan is a technology entrepreneur who has developed robots for kids with disabilities, virtual reality technology for the space station, and wearable sensors for training surgeons and soldiers. She is a global thought-leader in the relationship between technology and human performance and believes in a future of benevolent cyborgs.

Founder and CEO of AnthroTronix (est. 1999), Lathan has led projects from agencies such as DARPA, NASA, NIH, and NSF and recently developed one of the first FDA-cleared digital health platforms winning a prestigious Gold Edison Award. For this work, she was named a 2017 Woman to Watch by Disruptive Women in Health Care. Dr. Lathan has been featured in Forbes, Time, and the New Yorker magazines and her work has led to such distinctions as MIT Technology Review Magazine’s “Top 100 World Innovators,” and one of Fast Company’s “Most Creative People in Business.”

Dr. Lathan is a social advocate and actively involved in STEM educational outreach programs that empower women and minorities in science and technology. She founded Keys to Empowering Youth (est. 1992) for junior high school girls, coached for the FIRST and VEX robotics program, and advised the Smithsonian Institute’s Lemelson Center for the Study of Invention and Innovation. Dr. Lathan is on the Boards of the KID Museum Makerspace and Engineering World Health, which provides opportunities to college students to support the emergence of healthcare technology in the developing world. Cori is also the parent of two LGBT children and is passionate about LGBT issues and has written about her family’s experience for the World Economic Forum’s Global Agenda Blog.