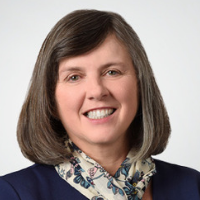 Dr. Krista Jangaard is the IWK Health Centre’s President & CEO. Krista first joined the IWK in 1996 in the division of Neonatal-Perinatal Medicine. In 2008, she assumed the role of Medical Director of the Neonatal Intensive Care Unit and in 2010 became the Neonatal-Perinatal Medicine Division Head. In addition, Krista is an associate professor at Dalhousie University in the department of pediatrics and the department of obstetrics and gynecology.

Krista completed her medical training at Dalhousie University where she also later earned a Masters of Health Administration and was awarded the Glenn Moore Memorial Award and the Nova Scotia Association of Health Organizations Award for Academic Excellence. Krista is a mother of two, lives in Halifax with her husband and dog, and is an avid gardener.