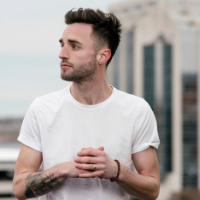 Jeremie is an award-winning actor, producer and host of popular original Canadian media, including film, television and podcasts. He lives with a genetic lung disease called Cystic Fibrosis.

Jeremie was born and raised on the East Coast of Canada. After discovering his passion for performance through competitive improv, he was accepted into the acting program at Ryerson Theatre School. Soon after, Jeremie began his career as a professional actor. He hosted the Gemini and Canadian Screen Award-winning CBC children’s television series “ARTZOOKA!” and the National Film Board of Canada’s educational documentary series “Space School”.

In the culmination of Jeremie’s affinity for laughter and education, Sickboy Podcast was founded. Listed as one of iTunes Best Of 2015, Sickboy Podcast is produced and hosted by Jeremie and his two best friends Taylor MacGillivary and Brian Stever. Together they explore conversations with a wide range of guests, talking and laughing about the experiences of living with terminal or chronic illness. Sickboy Podcast aims to tear down the walls of stigma and find levity in an otherwise dark situation.

Jeremie is a brilliant speaker, his keynotes having been described as “simply the most thought-provoking, powerful talk I’ve ever witnessed.” CBC released an acclaimed documentary on Sickboy in October 2017, just weeks before Jeremie gave a rousing standing ovation for his talk at TEDxToronto.

Jeremie is currently based out of Halifax Nova Scotia where he lives with his wife Bryde and their oversized muffin of a dog, Bigby.