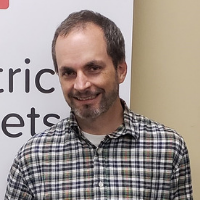 Ryan Cameron has been a serial innovator since 1997. In 2000, Ryan led a team to create the first interactive versions of the beloved Little Golden Books for Disney Interactive, and then became CTO of an international US based firm that delivered online education to fortune 100 corporate employees. Ryan was CTO of online educational companies for the next 10 years before starting his own innovativeonline educational company, and advised on international boards and organizations as well. Ryan created online educational products that won numerous awards and helped hundreds of thousands of fortune 500 employees learn important new skills in multi-year award winning online programs. Ryan joined Copernicus Studios in 2013 and led the interactive division to create one of the first speech recognition engines tuned to children’s voices to empower early literacy applications, and then founded Electric Puppets in 2016. Ryan is an avid rare book and antique collector and lives on an acreage in Chester, Nova Scotia.