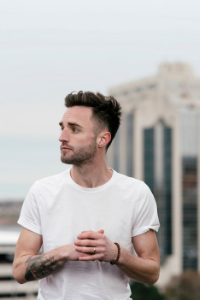 Jeremie Saunders, founder of the popular Sickboy Podcast series will be presenting the Keynote address to the attendees of BioPort 2018 during the afternoon on November 8th.  Jeremie is an award-winning professional actor, yoga instructor, public speaker and podcaster from the east coast who lives with the genetic lung disease cystic fibrosis. His podcast series Sickboy has been listed as one of iTunes Best Of 2015 and has been made into a CBC documentary.

Jeremie launched the Sickboy podcast in 2015 alongside his friends, Brian Stever and Taylor MacGillivary to explore conversations with a wide range of guests about their experiences of living with terminal or chronic illness. After experiencing the stigma associated with chronic or terminal illnesses firsthand, Jeremie took it upon himself to create a platform dedicated to diminishing that stigma and building a supportive community for everyone.

Since finding success with his podcast series, Jeremie has become a sought-after speaker with his keynote address at TEDxToronto being described as “simply the most thought-provoking, powerful talk I’ve ever witnessed.”

Jeremie is one of 70,000 people worldwide who are living with cystic fibrosis, the most common fatal genetic disease affecting Canadians today.